Andrew hasn't always been an acoustic guitarist or a singer/songwriter of course, but his guitar and creative urges have been part of his life since he was 12. When he was 20 he formed Nor'easter, an original hard rock band, with his childhood friend and longtime drummer Matt Bouley and vocalist Christopher A. Gursky. Taking their moniker from the iconic Atlantic storms that lash New England in fall and winter, it seemed an apt description of their sound - fierce, swirling and powerful.

Over a three-year period and three different bassists, they performed rarely but enjoyed great local fanfare in eastern Connecticut as well as notoriety with local authorities. They created an album's worth of songs evocative of both late 70s Rush and Led Zeppelin and the early 80s guitar-driven heavy metal along the lines of Ozzy Osbourne and Yngwie Malmsteen. In 1987, largely due to the lack of viable venues for original heavy rock bands in that area, they dissolved the band and moved on to other musical projects.

In 1989 their friend Pat Mills offered to record them on his 8-track reel studio. Despite being two years removed from their final show, the three original members were eager to preserve the music they had created together. They recorded ten songs that summer and made a rough mix, but without a record label or financial backing they didn't have the resources - or the technology - to properly finish the album. The routine editing, mixing and polishing done nowadays was simply impossible in the analog world in which they had recorded.

The advent of digital recording technology at working musician costs changed the game, and in late 2002 Andrew was able to get the tracks transferred onto his digital workstation with the hope of someday bringing the recording to life. Just days later Matt passed away, leaving behind two teenage children. While Andrew hoped to be able to preserve their father's musical legacy, his busy touring schedule and a grieving heart didn't leave much time for an intensive audio engineering project without a touring entity to promote it. The tracks sat on discs in an attic box, slowly degrading with passing time and seasonal temperatures.

When the pandemic sidelined the tour bus indefinitely, it did so just as his new Treasures in My Chest project released - in time to sit freshly packaged in boxes in that attic. Andrew once again contemplated tackling the Nor'easter album, but to his dismay, he found that those digital files he'd so carefully transferred had been corrupted. Fearing that the project had been lost, he turned to his longtime engineer and friend Dustin Delage, who was miraculously able to recover the original tracks and import them successfully into audio software.

Thus, in this time where the world is turned upside down, something old and precious has fallen out of our pockets. With Dustin leading the way engineering and co-producing, they have brought those original tracks to life the way the band had always envisioned (read his emotional thoughts about it here on the blog). It is exciting to hear Calm Before the Storm coming together; the raw rock energy and intricate arrangements that offer a window into Andrew's early musical years, while hinting at the musical craftsmanship that has become one of his trademarks. Nor'easter's sound is loud and heavy, with an engaging musicality. The music stands the test of time too, like many of the songs of the mid-80s era that have gone on to arena rock classics.

As the process unfolded, we were able to mark each of the founding members birthday with a project milestone. Chris Gursky officially became a recording artist when the first single "The Chemical Zone" dropped on his birthday. In Matt's honor, Dustin and Andrew hosted a livestream from Cabin Studios to preview the album for the first time. And on Andrew's birthday, he and Chris signed CDs for project sponsors at the New Hampshire campground where their families both summered. Like many projects, it turned out to have a whole lot of threads connecting it to a great many things.

Matt's legacy is forever preserved, and now you can enjoy it anytime you like too. (For more of the restoration story with photos, check out "Ghosts, Miracles and the Calm Before the Storm" from the local Loudoun Now.) 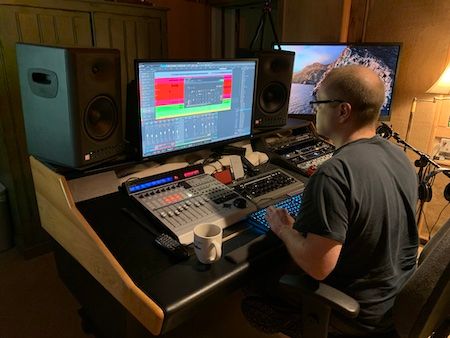