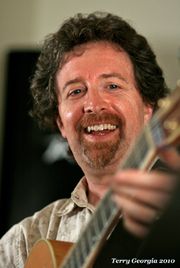 "Stretching across the landscape of American folk music is a highway paved by Guthrie and Dylan... now Virginia native Andrew McKnight takes his turn smoothing down the blacktop" - Performing Songwriter

Singer/songwriter, guitarist and now author Andrew McKnight has spent the past quarter century as a full time performing artist at festivals and intimate concert venues across the U.S. Hailing from the historic village of Lincoln, Virginia, Andrew also teaches guitar and songwriting, offers a variety of school and adult programs and workshops, and is a consultant for people learning to use DNA for genealogy and family history research.

Your help and support for continuing my work during this pandemic is hugely helpful and greatly appreciated - you can donate quickly and easily here. Thank you!

BIO: Since permanently leaving his corporate environmental engineering career in 1996, award-winning folk and Americana artist Andrew McKnight's musical journey has traced nearly a million miles of blue highways, and earned him a wealth of critical acclaim and enthusiastic fans for his captivating performances and nine recordings.

The singer, writer, guitarist and storyteller usually tours solo, but also has spent much of the last decade with founding Nitty Gritty Dirt Band member Les Thompson fronting their genre-bending quartet Beyond Borders. His music is heard on broadcast and internet radio around the world, and he's been a featured guest on the NPR/PRI syndicated Art of the Song and River City Folk shows.

His latest album and book Treasures in My Chest introduced a dynamic new cast of spellbinding songs and stories drawn from his own recent journeys into family history. Accompanied by three guitars, a dobro, Native American flute and an African hand drum (some with their own remarkable stories), the stage comes alive with intimate detail and vibrant lyricism. From placing you in the footsteps of his doomed Civil War ancestor Aretas Culver, to finding sparks of hope in the long winter nights on the shores of mid-1800s County Down, his vision, voice and pen have created a mesmerizing sweet spot deeply familiar to anyone who's wondered, "who am I and where did I come from?"

Taking his cue from the lyrics of his award-winning song "Good Things Matter", Andrew often shares his talents both on the road and close to home near northwestern Virginia's Blue Ridge to help "neighbors in need". Whether aiding people living on the margins with food drives at concerts, or singing for and about workers and communities displaced by mountaintop removal coal mining, he has seen the power of music to help others up close. His shows are as likely to include humorous songs written with kindergarteners as some of his powerful collaborations with combat veterans coping with PTSD.

His empathy and curiosity span a wide range of subjects, from the vulnerability of an illegal immigrant woman ("These Shoes") to imagining what words Thomas Jefferson and Sally Hemings might have written about their lives together ("Diary"). In addition to his passion for community causes, he is a longtime advocate for preserving American landscapes and heritage. Several of McKnight's songs are rooted in Appalachian history and culture, including the haunting Civil War ballad "The Road to Appomattox".

While no stranger to elite stages like the Kennedy Center, the Rocky Mountain Folks Festival or the Katharine Hepburn Theater, McKnight's music seems to spread most rapidly through many of the diverse causes that have embraced his music over the years. He's been profiled in a Wine Compass video episode with his friends at Catoctin Creek Distilling Company, his song "Made by Hand" is in Low Coal, a documentary about conflicts over mountaintop mining in West Virginia's Coal River Valley, and "Good Things Matter" was featured in a podcast of Bread for the World, a global faith-based organization working to end hunger.

Andrew has produced or performed on recordings by many different artists, been a contributing writer for Blue Ridge Country and Americana Rhythm magazines, and is a sought-after clinician for songwriting and music business workshops. He enjoys an artist endorsement with Fairbuilt Guitars and since 2002 with Elixir Strings. He is an insightful essayist and poet, a gifted workshop leader, and a warm and thoughtful interview.

We hope you enjoy your visit! Can't find what you need? Try the Frequently Asked Questions (FAQ). Or email your question if you can't find the answer easily.